What is Bell’s Palsy?

In Bell’s palsy there is inflammation around the facial nerve and this pressure causes facial paralysis on the affected side. 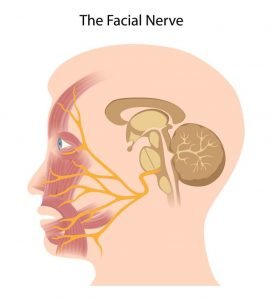 It is the commonest cause of facial palsy, accounting for 80% of all cases and occurs most commonly between the ages of 15-45

Women in the third trimester of pregnancy (the last three months) are at increased risk of developing Bell’s palsy.

In addition, there appears to be a higher incidence of Bell’s palsy in winter.

Bell’s palsy is an idiopathic condition, meaning there is no conclusive cause for the condition.

It has not been established why the facial nerve becomes compressed. Links have been made with viruses (herpes, influenza and respiratory tract infections) as well as a depleted immune system and stress.

Some scientists suggest that Bell’s palsy involves neurodegeneration due to ischaemia (restricted blood flow) or oedema (fluid build-up) although most cases have no definite cause.

Bell’s palsy often comes on suddenly, without warning, over a number of hours, peaking at 72 hours.

The main symptoms are:

Although no certain cause has been established, people newly diagnosed with Bell’s palsy should understand that they are unwell.

It is important to get plenty of rest even if they have no other symptoms. If you are at work or school, it may be necessary to take some time to recover.

Recovery usually takes a few weeks but it sometimes takes months. Steroids can be effective if they are given within 72 hours of onset and antivirals are also used.

In my experience, there is another option….

Acupuncture is a safe and effective treatment

My mum had Bell’s palsy about 20 years ago and her GP recommended that she try acupuncture, with great outcomes. In fact, this was my first ever encounter with acupuncture!!

Acupuncture has been found to reverse the facial paralysis caused by Bell’s palsy.

A recent study has shown  a 90-98% clinical success rate using acupuncture.  Patients receiving medication only had a 60% success rate.

The use of electroacupuncture can enhance the effectiveness of acupuncture too.

The number of treatments required varies from person to person and can depend on factors such as the severity of the symptoms and whether the case is chronic or acute.

Generally though, I find that around 5-6 sessions sees a good improvement.

Are you thinking of  trying acupuncture for Bell’s palsy?

I recommend that you use an acupuncturist that is registered with The British Acupuncture Council (BAcC) because members of the BAcC are guaranteed to have completed full training to degree level and will be covered by most private health insurers.

Phone, email or schedule a free 15 minute phone call to find out more.